After hitting lows of $48k over the weekend, Bitcoin (BTC) has soared to $54.3k at the time of writing, according to CoinMarketCap.

Bitcoin adoption in Asia is taking a new turn as more institutional investors are joining the network, as acknowledged by Joseph Young. The crypto analyst explained:

“The biggest gaming company in South Korea, Nexon, bought $100 million worth of Bitcoin. Nexon also bought Bitstamp and Korbit, two major exchanges in Europe and South Korea, in the past three years. This is a big step forward for institutional BTC adoption in Asia.”

Earlier on, Young had revealed that crypto interest in Asia was brewing, which showed long-term optimism in the market.

Nexon Co. joins a growing list of global tech companies embracing Bitcoin, like American electric carmaker Tesla. The online game provider bought 1,717 BTC, which broke the record as the largest-ever purchase of cryptocurrency by a company traded in Tokyo.

Bitcoin’s surge is expected to continue

Bitcoin has been in a consolidation state ever since it hit an all-time high above $64k recently. The top cryptocurrency nosedived to lows of $48.5k over the weekend as speculations about the U.S. President Joe Biden’s administration increasing capital gains taxes took center stage in the crypto space.

“With all that frictious leverage wiped out of the system Bitcoin is unstoppable.” 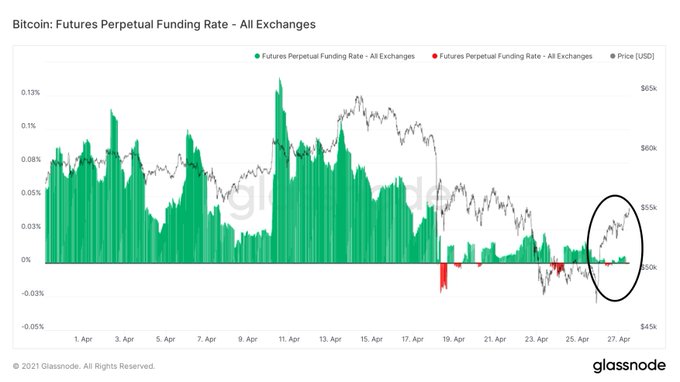 Bloomberg’s senior commodity strategist, Mike McGlone, believes that there are enough catalysts surrounding BTC that can easily push its price to $100,000. For instance, the perception that Bitcoin is an alternative to cash and the growing number of proposed Exchange Traded Fund profits are part of the core catalysts for the coin.

With Bitcoin’s transaction volume reaching a monthly high of $4.45 billion, as alluded to by Glassnode, time will tell whether the top cryptocurrency will hit a price tag of $100,000 in 2021.